In 1966, Ivan Sutherland, a pioneer in the then-new field of computer graphics, began working on a device he had designed that would allow people to interact with computers in a unique way. The device, nicknamed the Sword of Damocles, hung from the ceiling on a pivoting metal post and sat like a helmet on a computer researcher’s head. Using a set of glass prisms and two small video monitors, the mechanism reflected computer-generated images of objects such as wire-frame boxes into the user’s eyes. Each monitor displayed a slightly different image of the object; the brain combined these images into one seemingly three-dimensional form floating in midair.

Even more remarkably, the device—called a head-mounted display, or HMD—displayed different views of the three-dimensional object as the user’s head moved. Sensors attached to the HMD constantly monitored which way the user was looking, allowing him to observe the object from many angles. As primitive and as cumbersome as it was (to wear the HMD, its users had to strap it on like a football helmet and stay within the reach of the support rod), Sutherland’s device was the first major step toward the technology that would become virtual reality.

Until the late 1960s, most computers were chunky, gray behemoths that took up entire rooms; they were so expensive that only governments, universities, and large corporations could afford them. These computers were complicated machines to use. People programmed these computers using punched cards or punch tape—strips of thin cardboard or paper with patterns of holes that formed a code computer could read—or keyboards and switches that were part of a central control desk. Results usually were printed out on Teletypes or electric typewriters wired to the computer and sometimes were in a different code that only computer experts could decipher.

Virtual reality came into being in the mid-to-late 1980s, following decades of research into ways to remove the hardware wall between computer users and computer data. With all the senses that human beings have, some computer researchers thought, why should people be limited to using mainly a keyboard, a video screen, and (starting in the 1980s) a mouse to handle data? Realizing there was no good answer to this question, the researchers began to develop computer systems that allowed people not just to process data but to play with it.

The computer scientists who set out to mimic the physical world soon realized that their goal would not be an easy one to reach. Tricking the brain into accepting a computerized world as real is a complicated process. Human beings experience the world in three dimensions: vertical (up and down), horizontal (left and right), and depth (near and far). The key to mimicking the physical world lies in replicating the third dimension, the one that conveys a sense of depth. For the most part, three-dimensional, or 3-D, perception involves three of the five senses—vision, hearing, and touch. In humans, sight is the most heavily used sense, and it is the sense used most to perceive the 3-D world. People see in three dimensions using binocular parallax. Binocular means “two-eyed,” and parallax refers to the way objects seem to change shape when viewed from different angles. Because the eyes are separated by about 6.5 centimeters, or a little over two and a half inches, each eye views the world at a slightly different angle from the other. These images overlap in the vision-processing area of the brain, which merges the signals coming from each eye into a single
three-dimensional picture.

Hearing, the second-most heavily used sense people have, also gives people clues about the three-dimensional world. Upon hearing a noise, most people can tell from which direction it is coming and roughly judge the distance to its source. Indeed, some people who were born blind or who have lost their sight can navigate through a room by listening to the way sound echoes from objects around them. Many VR systems have achieved a great deal of success in mimicking the appearance of 3-D environments simply by combining audio and visual effects. Even some strictly two-dimensional multimedia systems— computers that contain compact disk (CD) players, sophisticated sound effect generators, and high-quality video monitors—are able to give users a feeling of being thrust into the third dimension.

The sense of touch backs up the sight-and-sound world picture with information about weight, shape, hardness, and other details that fix objects in all three dimensions. Touch-oriented, or haptic, devices— ones that vibrate, slow down, or otherwise convey a sense of how objects feel—are becoming a big part of many computer simulations.

They even play a role in non-VR computing, such as computer mice that provide touch effects when pointers glide over on-screen buttons or Internet links.

Smell and taste are far more difficult to simulate. Unlike the other three senses, smell and taste involve the analysis of chemicals that flow into the body from outside, a phenomenon that cannot be reproduced with clever electronic or mechanical tools. No chemicals, no odor; no chemicals, no flavor. Researchers have been experimenting with devices that can generate odors to accompany computer displays, and a few have been successful enough to make the leap from laboratory to the commercial market. Taste has posed an even greater problem, though, and is not likely to become a part of the human-computer interface anytime soon. 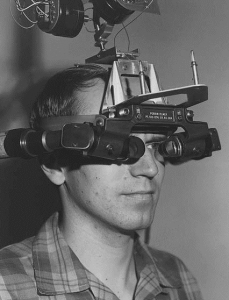 One of Ivan Sutherland’s students tests out the Sword of Damocles head-mounted display Suther-land built in the 1960s. The two prisms in front of the student’s eyes reflected computer images from the cylin-drical cathode-ray tubes.
(University of Utah/Evans & Sutherland Computer Corp.)

Resource:
Virtual Reality: Simulating and Enhancing the World With Computers (Science and Technology in Focus) (2003)

Virtual Reality: As Real As You Want It To Be

The truly oldest form of VR is located in a relatively small area stretching roughly between your left ear and your right ear.